In every community, in every state, there are many homeless animals that end up in shelters. Half of these animals are euthanized just because there are not enough people to adopt them. Enter the South Georgia Low Cost Spay & Neuter Clinic who’s goal is to prevent thousands of unwanted births and reduce local shelter intakes and needless euthanasia of dogs and cats. If you’ve got questions about spaying or neutering your pet, clinic staff members are the ones to ask and for your convenience, the most commonly ask questions have been answered her
e in this issue of Health & Life!

Q: Why should I have my dog/cat spayed or neutered?

A: Shelter euthanasia is the number one killer of companion animals. Spaying and neutering is the only way to reduce or eliminate that. It’s also better for your pet’s health. And it’s better for you because it will make your life easier if your pet is spayed or neutered. Animals can be miserable — and make you miserable — when they are in heat. And then there’s always the problem of what to do with the puppies. There’s also the financial side. Just in the Atlanta area alone, more than $15 million is spent annually dealing with stray and unwanted pets. That’s your tax dollars. 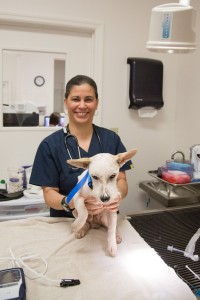 ABOUT DOGS…
Q: Shouldn’t I let my dog have a litter before I spay her?

A: No. Absolutely not. All the medical evidence suggests a dog should be spayed before her first heat. It’s much easier for her then because it’s a much easier surgery at that time. And the problem with letting your dog have a litter is you’ve just instantly contributed to the pet overpopulation problem. Now you have to find homes for all those puppies. And for each home you find, there’s one less home for a dog that was already born. Plus, you can’t be responsible for what the new owners do. So unless you spay or neuter all the puppies before placing them, the new owners may let their dog breed as well. Now you’ve added even more dogs to the pet overpopulation problem. The only responsible thing to do, given the problem in this country, is to not allow your pets to reproduce. Some people say they want their children to witness birth. OK, you can still do that. There are plenty of rescue groups out there trying to help animals that have been abandoned by irresponsible pet owners. Many have pregnant animals. Volunteer to foster a pregnant dog. You’ll be helping the group as well as the dog, and you’ll give your children a chance to see a litter being born and raised.
Q: Should I let my dog have a heat before I spay her?

A: We spay or neuter dogs at our clinic at 8 weeks as long as they weigh at least two pounds. Of course, it varies by breed. Some of the tiny breeds have to be done later. But larger breeds are usually ready by two months of age. There are still some people who say pediatric spay/neuter is dangerous, but that’s not true. It has become much more widely accepted. Those ideas about needing to wait until after a dog is six months or a year old are really antiquated and the evidence is to the contrary. Even the American Veterinary Medical Association supports early spay/neuter. The puppies recover a lot faster than adults. It’s an easier surgery for them, and it reduces the rate of disease later on. It’s just a much easier procedure on younger animals.
Q: Don’t dogs get fat once you spay or neuter them?

A: Dogs, just like people, get fat when they eat too much and don’t get enough exercise. And that’s something you can control. You can use portion control and take your dog for a walk.
Q: My dog is a guard dog.

If I spay or neuter him, will that stop him from protecting my house? A: Spaying or neutering is not going to affect your dog’s desire or ability to protect your home or protect you. Guard dogs are trained to be guard dogs. Their behavior is a function of genetics or instinct, environment, and training. Many, many police canine units spay or neuter their dogs. There’s no correlation between spaying or neutering an animal and its ability to protect you. But people also need to understand that unless their dog has been trained to be a guard dog, it isn’t a guard dog. Most dogs are naturally protective, but if you truly need a dog for protection, and your dog isn’t trained, you’re at risk.

Q: Will my dog stop running away from home if I neuter him?

A: Well, you really should keep your dog confined. But neutering certainly does decrease the instinct to roam. That’s because unneutered dogs are constantly seeking to match up with unspayed females. It also will decrease your dog’s urge to escape your home or escape your fence. But in this day and age, there’s no reason to allow a dog to freely roam the streets. It’s dangerous.
Q: My dog leaves marks all over my house.

If I neuter him, will that stop? A: Neutering a dog will decrease and could eliminate that kind of marking, which is a territorial behavior. That’s what they’re doing; they’re marking their territory to ward off other male dogs that could come into it and get their female. So neutering may eliminate the problem. But there also could be other health issues or behavioral issues involved at this point. So it’s a really good argument for neutering early, before the animal reaches sexual maturity and the marking behavior has become habit. 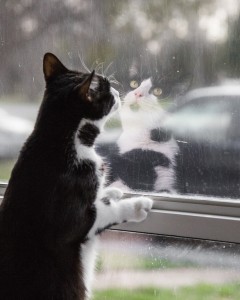 ABOUT CATS…
Q: Shouldn’t I let my cat have a litter before I spay her?

A: No. It greatly reduces the risk of certain cancers if you have her spayed before the first heat and certainly before she has a litter. Most places are overrun with kittens. There are millions of cats and kittens that need homes and millions more that are abandoned. There simply aren’t enough homes for all the cats that get born every kitten season.
Q: Should I let my cat have a heat before I spay her?

A: It’s a myth that animals should have a litter or a heat before they are spayed. There are no health benefits to that at all, and it’s a much easier medical procedure if you spay before the first heat. All the benefits you get from spaying or neutering your pet are magnified by spaying or neutering before the animal reaches puberty.
Q: Is it OK to spay my cat when she’s just a kitten?

A: Yes, as long as she’s at least eight weeks of age and weighs at least two pounds. Pediatric spaying and neutering is widely accepted. Those ideas about needing to wait are really antiquated and the Cats can go into heat very early. They can have a litter at six months of age, and they can have three litters a year. Also, if you’ve ever been around a cat in heat, you know it’s miserable for people. They yowl loudly and continuously. They want to get out. It really alters their behavior. And every unneutered male cat in the neighborhood will be at your house spraying your front door. Your whole house will reek of cat spray. It is a really regrettable experience.evidence is to the contrary. Even the American Veterinary Medical Association supports early spaying and neutering.
Q: Don’t cats get fat once you spay or neuter them?

A: A healthy weight goes back to portion control and exercise. We recommend cats be kept indoors, so you should have enough environmental enrichment to keep your cat happy. Have vertical spaces and climbing trees. Provide places where they can hide and play. But portion control is the main thing. Don’t free feed your cat.

Q: Will my tomcat stop running away from home if I neuter him?

A: We don’t recommend having free-roaming cats. And if you have an unaltered male cat, you’re probably not seeing much of him anyway. Usually, neutering a tom will curb its desire to roam, although cats are a little different than dogs and wander for reasons other than reproducing, such as hunting. So neutering will reduce the instinct to roam, but it won’t eliminate it. Unaltered males also are more at risk for feline leukemia [FeLV] and FIV [feline immunodeficiency virus]. That’s because they fight, and deep bite wounds are the leading factor in the transmission of those diseases.
Q: My cat sprays all over my house. If I neuter him, will that stop?

A: More than likely it will. It will certainly take away that hormonal urge to spray. Neutering early is your best bet to avoid that urge altogether. If you have a neutered cat that is still spraying, you should see your veterinarian. It could be a behavioral issue, or it could be a health problem.
Q: Will spaying or neutering my cat prevent future illnesses?

A: You’ll have a lower incidence of mammary tumors. We see a lot of unspayed cats come into our clinic with pyometra — an infection of the uterus — which can be a life-threatening disease for them. For male cats, you eliminate testicular diseases, and for females, you eliminate the risk of uterine diseases. Generally, spayed and neutered pets live longer, happier lives.