Aaron and Andrew Eunice are two brothers from Cook County who are Christians, play sports, love the Georgia Bulldogs, and were both diagnosed with rare brain tumors within weeks of each other.

Craniopharyngioma is a benign brain tumor that begins near the pituitary gland and occurs more often in young children and older adults. The pituitary gland controls hormone production and output in the brain and body, meaning the tumor can have a myriad of effects on development and growth. In children, symptoms can include any combination of visual and auditory impairment, headaches, fatigue, and physical developmental delays.

Aaron, the older brother, is currently in seventh grade and was diagnosed when he was 10 years old. 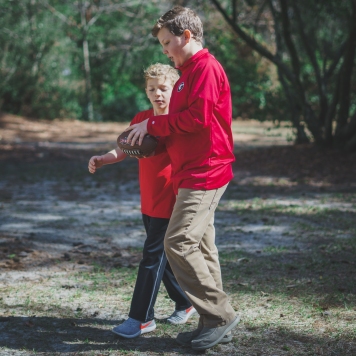 “Aaron was there to comfort him in ways his father and I could not. Aaron knew exactly how he was feeling and told him, ‘God’s got this, just as he’s got me.’ In that moment, they formed a bond like no other.” 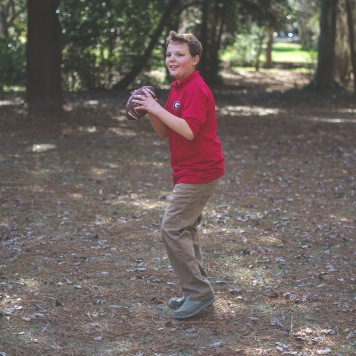 He initially showed no signs or symptoms until a routine eye exam when an optometrist noticed swollen optic nerves, something unusual to find in an otherwise healthy kid Aaron’s age.“God’s got this,” Aaron said when he first learned about his diagnosis. That response has been the entire family’s motto throughout the whole experience.“Aaron has been very strong through everything,” Katie Eunice, their mother, said. “He did not complain one time when he was recovering from surgery or enduring proton radiation.”Proton radiation is a type of radiation therapy that targets tumor cells while avoiding- ing normal, healthy cells. Andrew, younger than Aaron by two years, was diagnosed with craniopharyngioma just three weeks after Aaron’s diagnosis, unusual not just because this type of tumor is rare, but also because it isn’t typically hereditary. Andrew initially presented with delayed growth. Further testing revealed low thyroid levels and delayed bone development.

According to their mother, Andrew didn’t take the news as well as Aaron. Andrew was quiet, worried, and scared at first, and Aaron understood his little brother needed him.

“Aaron was there to comfort him in ways his father and I could not,” Katie Eunice said. “Aaron knew exactly how he was feeling and told him, ‘God’s got this, just as he’s got me.’ In that moment, they formed a bond like no other.”

Andrew’s tumor was in a position that allowed 95 percent of it to be removed through surgery, so he will not have to undergo radiation treatments like Aaron. Andrew will, however, be monitored via MRI scans every three months for 2-3 years after the surgery. Both are fighting their own battles, as well as each other’s. Their family travels to Jacksonville once a month for numerous doctor appointments. The boys are followed closely by neurologists, endocrinologists, otolaryngologists, ophthalmologists, and more.

“The biggest change in our family’s everyday life is medicine. Katie Eunice said. “Aar- on and Andrew both take morning and night medicine. Andrew also has one to two shots daily. Aaron takes thyroid medicine and a whole regimen of vitamins. Andrew is on total hormone replacements. Since Andrew’s pituitary gland is nonexistent, he has a rescue shot if his body is ever under too much stress.”

Aaron and Andrew continue to be strong through the process and know they aren’t alone in this battle. They have tremendous support from their family, God, and most importantly, each other.

CRANIOPHARYNGIOMA accounts for approximately 6% of all brain tumors in children

It is diagnosed most often between the ages of 5 and 14, but it is possible for a person of any age to be diagnosed with craniopharyngioma.

Approximately 140 people under the age of 15 will be diagnosed with the disease this year.